“Pray, hope, and don’t worry. Worry is useless. God is merciful and will hear your prayer.” —St. Padre Pio

Recently, I overheard a snippet of a private conversation between strangers. While it could technically be classified as eavesdropping, I’m certain God didn’t mind my listening in. In fact, though the conversation was not expressly intended for my ears, witnessing the seemingly chance encounter may have been part of God’s plan. Looking back, he was leading me to a spiritual breakthrough. In other words, even God can bring good out of my inclination for being nosy.

The day began with the usual morning routine. I parked in my out-of-the-way way spot, careful to avoid the hustle and bustle of school carline and escorted my kids to the designated area for drop-off. As I walked back through the church grounds, I glimpsed a father rushing to herd three children in a single file line. I doubt they saw me. I was on the opposite side of the courtyard and was leaning over to pick up my phone which I had dropped. The tall, business-attired man was taking long, confident strides on the path towards drop-off; while his kids, laden with disproportionately large backpacks and water bottles, trudged behind.  The dad, like a mother goose, looked over his shoulder a couple times to confirm his stair-step goslings safely trailed. The first in line after the father, the biggest of the kids, looked to be about seven or eight years old. He was lagging. Tottering forward, he seemed disoriented by the foreign path the father had chosen. I didn’t recognize the family and assumed they were new to the school. The dad kindly urged, “C’mon, John. It’s this way. You’re going to be late.”

“Daaaad! Slow down.” The little boy’s water bottle fell at his feet. As he bent to pick it up, he reiterated, “I mean it!” His words were thick with frustration and disapproval. Now the little boy came to a complete stop on the path, taking stock of his surroundings. His smaller siblings, unaware of the hesitation, like dominoes, comically slammed into the wall of the backpack in front of them. Papa goose, spotting the traffic disturbance in his wake, once again coaxed, “This way, buddy!”  But the boy did not budge. To be fair, from the young boy’s vantage point, the school building completely obscured the view of the playground beyond. He could neither see, nor hear the gaggle of students awaiting the morning bell just a short distance away. Without that tangible proof, he would not continue on the sidewalk to nowhere. The dad slowed but didn’t stop. He was probably going to be late for work and time was a tickin’. The frustrated child  boldly confronted the dad from behind, shouting, “Do you even know where you’re going?!” The question cut through the morning stillness like a sling of speeding poison arrows. 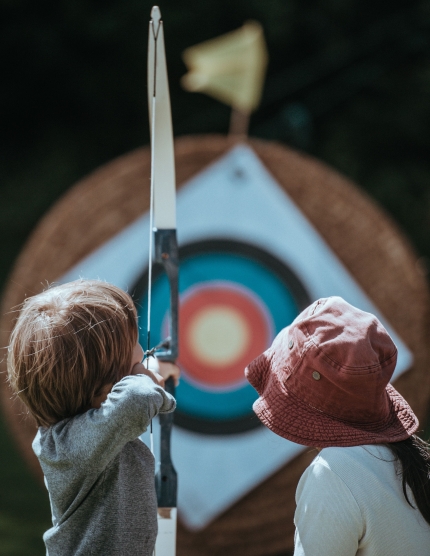 I wasn’t able to see the dad’s response. By this point, I was well past the hubbub and would have had to crane my neck towards them, making my eavesdropping completely obvious. I have some standards of propriety. But I didn’t need to see the father’s face nor hear his exasperated voice. I had experienced the same situation with my own kids—many times. It’s not uncommon for them to express suspicion in my authority. They regularly question my leadership, ironically as I try to shepherd them somewhere they need or want to be. How many times over the years have I heard, “Are you sure you know what you’re doing?” or “That doesn’t sound right. You better google it,” and “You’re not making a whole lot of sense right now, so…” Honestly, the injustice of it all—being doubted by young upstarts who not long ago were putting their shoes on the wrong feet.  And how could they so easily forget the 15-Ga-Jillion times we’ve come through for them, delivered them to where they needed to be, showed up on time, been five steps ahead to get them to safety? It’s what a decent parent does.

I couldn’t resist chuckling smugly under my breath. “Poor dad. Who do these kids think they are? That punk 7-year-old thinks he knows more than his experienced, middle-aged father who is undoubtedly now going to be late for wor—THUNK! One of those arrows had hit its intended target. Piercing hot awareness spread from my core radiating into my bloodstream.

Over the years, I’m slowly beginning to grasp God’s bountiful sense of humor. The Divine Comic’s jokes are intricate, full of depth, and above all else, perfectly timed. I had walked right into another Providential punchline.

That kid’s angry, pointed question, “Do you even know where you’re going?” reverberated in my thoughts. Such a stinging accusation… How many times have I uttered that very sentiment to the Father of all? He who created me is regularly the recipient of my doubt, suspicion, and outright condescension. Well played, Lord.

“I’m that precocious punk kid, right? That’s me who always questions You? I’m the control freak who demands to know where You’re going? I’m the upstart who doubts You over and over. It’s me who needs more proof or I’m not budging. Yet we both know how many times You have lovingly delivered me to exactly where I needed to be.”

Being met with mistrust when it is unwarranted is a tough pill to swallow. Sadly, I speak from experience as a devoted mother who often answers those concerns with a decided lack of charity. Our Holy Redeemer, however, who willingly carried all of our unjust cynicism, fear, and disapproval on His scourged human shoulders, is gratefully more than capable of handling it all.

But my breakthrough wasn’t so much about how God must feel when I throw a tantrum because I naively think I’m lost. I saw myself in that little boy. I carried his heavy backpack. I shared his upset and frustration at not seeing where the path led. He was worried about not getting to the right spot before the bell rang. I completely empathized. It is so difficult to surrender to someone and know that they have your best interest at heart. It’s downright scary. But his father loves him. The Father loves me. With the aid of His grace, I must rest in that understanding.

The Lord always wants what is best for us. Had the little boy gone along with his dad and let go of all the worry, it would’ve been a much smoother morning. Instead, that brief episode between father and son that I had witnessed likely ended in a meltdown. A lot of unnecessary stress and anxiety. No trust, no peace.

From now on, during difficult times, when I’m tempted to shout out to the Heavenly Father, “Do you even know where you’re going?” I will fight off the fear and make an effort to trust His extreme goodness and love. I will strive to rest in His peace. It is foremost in my prayer. And moving forward, maybe, I’ll have a little more compassion for my own kids when they question whether I know where I’m going. To be fair, I do make a whole lot of u-turns. I’ll just gently remind them what I have recently come to terms with—unfamiliar landmarks, twists, and turns are all to be expected on the journey to heaven. God lovingly leads us. Enjoy the view. No map required.

Cast all your anxieties on him because he cares about you.

One thought on “No Map Required”