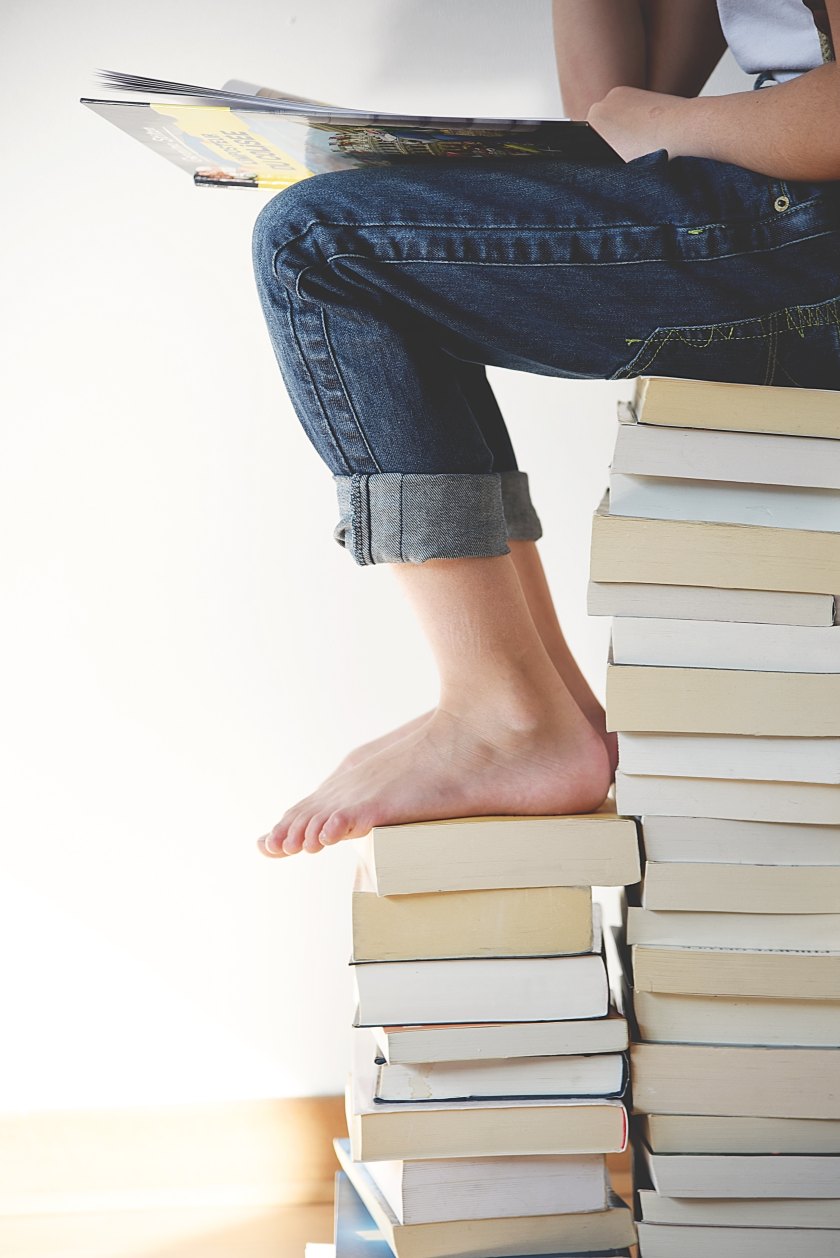 Is it only me, or is it getting harder and harder to focus?! Since the inauspicious purchase of my so-called smartphone, I’m beginning to feel dumber and dumberer. I used to read a whole lot more—not just those vacuous fashion/entertainment magazines that seem to secretly breed like rabbits in my dentist’s waiting room. I used to read actual books… regularly for Pete’s sake! My hope for the new year is not New Year/ New Me. Nope. My plan rather is New Year/ Old Me. I plan to put the devices down and pick up books, just like I did in the olden days of yore. Yee-haw! I’mana get me edu-ma-cated in 2019! (And in case my first born spelling/grammar drill sergeant should read this, the mistakes are intentional!)

As we all know, transitions take time. So, before diving too deeply into those heavily word-laden dusty old books, how about some other suggestions to whet your intellectual appetite? After all, the libraries of Rome were not built in a day. They had libraries, right? Oh boy. Note to self: sprinkle some Roman history into the reading list. Before I get to my recommended reading Boasts for you, I’ll share some leads that may act as a springboard towards more book-learnin’.

I would call this a NO-BRAINER, except for the fact that it has seriously regenerated brain cells for me, like MiracleGro for my mind. In case you’ve been living under a rock, this site is chock-full of insightful programming, books, talks and conversion stories about the Catholic faith. You have a tough question about what we believe,  what the Church actually teaches, what you learned as a kid and can’t reconcile as an adult?  FORMED will have a captivating answer for you via accessible media. If you’re a cradle Catholic like me, you’ve been caught stammering and stuttering when trying to answer a perfectly valid question about scripture or Catholic teaching. This site will be your new best friend.

In my archdiocese, I think all parishes have access through a special code. This means it’s FREE. If you don’t officially belong to a parish, the jokes on you. We are actually all assigned a parish, Catholic and non-Catholic alike based on location. The Pastor is responsible for all the souls of that geographic swath. Who knew? A Canon lawyer explained that to me. The whole idea of being registered to a particular parish, that’s a protestant thing we took on. So, find a Catholic church close to you, give them a ring and ask for the Parish access code to FORMED. I’ve heard it described as the Catholic Netflix. To me, it’s more of a huge contemporary Catholic library accessible through your phone or computer. If you don’t know where to start, begin with the talks. Anything by Scott Hahn will be incredibly informative and entertaining. They’re like great little podcasts to pass the time on your commute while growing gray matter.

A mom from my kids’ school quietly launched this in the fall—just in time for me to do some serious catch-up binge-listening over Christmas break. Needless to say, she already has an impressive inventory of episodes. That’s because the producer/host, Jules Miles, is a gifted storyteller who beautifully weaves her thought-provoking interviews with compelling subjects regarding our Catholic experience. I especially enjoyed her series on Catholic literature. If I had known more about all the prolific Catholic authors, I would’ve figured out the literary reference in the podcast title, Mystery Through Manners. Apparently, it’s a reference to Flannery O’Connor. This podcast offers an amusing escape in the style of some of the better NPR shows like This American Life but explores a wide range of contemporary Catholic topics. I listened to five episodes while doing a massive cleaning/purging. The time mercifully flew by with the aid of this audio gem. 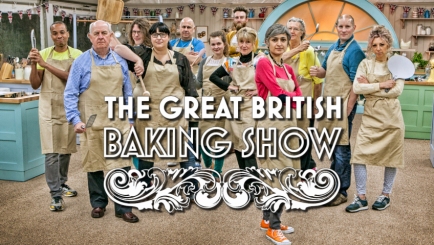 This one’s not a secret for Netflix aficionados. But what’s really surprising is that my kids love it too. They started watching it over Christmas break. I was longing for something contemporary and fun we could enjoy as a family. My husband and I have been devotees of the show for the last few years, but I love that the kids are now on board. The series showcases some mild-mannered, but nonetheless exciting baking competitions in a delicately-iced, family-friendly confection. Everyone is charming with their cheeky slang and British accents. For instance, “That’s just scrummy!” Judges Mary Berry and Paul Hollywood have a delightful rapport as they take on the roles of good cop/bad cop in dissecting the elaborate desserts. The show hosts add to the fun by introducing the challenges and interacting with the contestants while having a good British laugh. Their pun-filled timing prompts are so corny you can’t help smiling. “Bakers, hands off your buns! You have only a minute left!” An added bonus: my kids are finally starting to appreciate the amount of effort required for one batch of homemade cupcakes. Please note: I’m not a fan of the newer seasons (5 & 6) which feature new hosts and a new judge. The show’s rhythm is off! The hosts are so oddly dressed and coiffed, it’s sadly a major distraction from all that amazing baking. Seasons 5 and 6 nearly made the Pot Roast list.

Onto my… er, extensive book list of two. But they’re good! 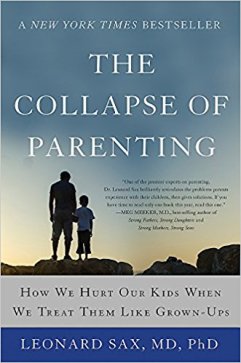 The Collapse of Parenting: How We Hurt Our Kids When We Treat Them Like Adults by Leonard Sax

The principal of our school recommended this to our whole parenting community. It is an amazing read because it makes so much sense. What’s that saying about common sense? That it ain’t so common. This author speaks such truth that when you read it you can’t help being struck with the obviousness of it all, even though you had absolutely no clue before. He walks you through very practical advice to better equip parents and kids against all of the cultural pitfalls. He urges us to grow up and be parents to our kids who need to be guided. Kids don’t come out of the womb knowing right from wrong, politeness, and virtues. They have to be taught. This provides a great perspective and a practical plan to implement in family life. Reading it even provided me with more insight into my own childhood. A definite must-read if you’re a parent. Did you catch that, husband of mine? 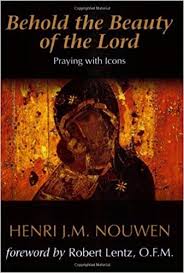 Behold the Beauty of the Lord: Praying with Icons by Henri J.M. Nouwen

A friend who is a Russian Orthodox priest gave me this last Christmas. And what a gift! It managed to kickstart my prayer life during a particularly dry period. If you’re in a spiritual rut, consider delving deeper into icons. The book walks you through meditations on four famous Russian icons. According to the writer of the book’s forward, Robert Lentz, O.F.M. “we have forgotten how to respond spontaneously to an encounter with the Divine.”  Um, hook me up!  Before reading the book I had only a very vague understanding of icons. They always looked like really out-there artwork with strange eyes and baby Jesuses that resemble creepy mini-men. I’m still not very knowledgeable, but I recognize the useful way they can engage our minds and imaginations as entry points into prayer.

Now onto my one and only selection for over-hyped, underwhelming, big, steaming…

This new Prime Original series chronicles the life of William Thackeray’s anti-heroine, Becky Sharp in a modern adaptation of his mid-19th-century novel, Vanity Fair. I really wanted to like this! I’m a major Anglophile, so I’m easy to please. The series takes place in merry old England. The costumes and sets are lavish. In addition, it’s one of those rare series that isn’t over the top with profane language or sexual content. It’s rated TV-14, probably due to war scenes detailing the battle of Waterloo. I haven’t read the actual book, (see opening paragraph of this post!) but I know it was originally published in installments, so it definitely carried over a certain soap opera-like style. While I can handle a good soapy drama, the storytelling and some of the acting felt just as flat as your regular daytime TV soap, except with a much better wardrobe and decor. I was never quite sure whether to admire the indomitable, coquettish Becky or despise her as she climbs the upper echelons of society. The director chose strange 80’s music at the close of each episode which had my husband and I rolling our eyes and hastening for the mute button. Overall, it’s not horrible, but it’s certainly no PBS Masterpiece Theater presentation.

I hope you find some useful nuggets in my latest Boasts & Pot Roasts. Next time I write one, I hope to contribute more books to the list.  The 2019 challenge is officially underway.