My oldest brother is not a cook. His idea of homemade is the “take & go” rotisserie chicken from Costco. When he’s channeling his inner Bobby Flay, he shreds it, adds some mayo and voila—chicken salad!

And this guy can put it away! His bean-pole stature is very misleading. You’d think he got by on a steady diet of saltine crackers and water. In actuality, his appetite is legendary, at least in the circles of our extended family where a hearty appetite is a highly-sought accolade. When we were teenagers, I recall an instance after a gluttonous Thanksgiving feast. While my mom bustled in the kitchen doing clean up, the rest of us sat immobile, just staring at each other, eyes glazed over, contemplating the vast amounts of food consumed. Tim, however gleefully walked up the stairs and shouted, “I’m getting hungry again. Can anyone go for a Big Mac?” He was already strategizing his next culinary chess move. 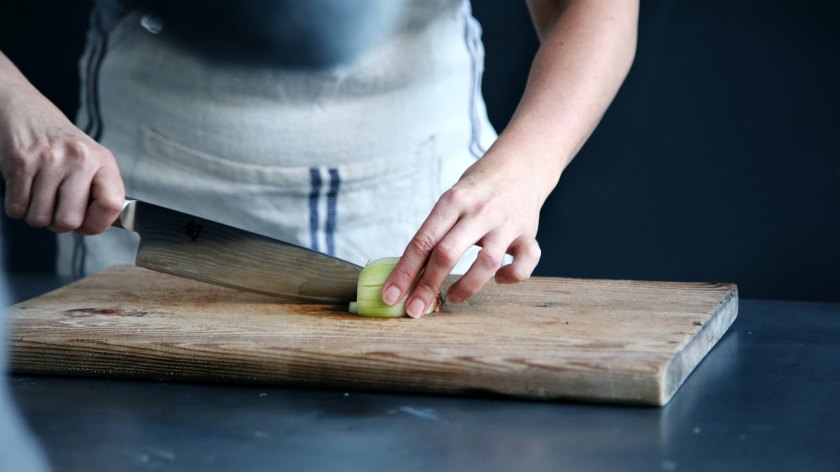 With a guy who relishes food as much as he does you’d think he’d a have a natural inclination for cooking. Not so. But he does appreciate the skill the same way a quadruple bi-pass heart patient respects and marvels at the abilities of his surgeon. He hails a simple homemade dessert with the same anticipation as most await the latest, greatest iPhone. When I describe a special touch of melting chocolate chips on the stovetop, he acts like I’ve cured cancer. “That is amazing,” he replies wide-eyed. But as anyone who bakes or cooks knows, it’s not that hard. I set out to prove that to him. He’d shown up for a home cooked meal and sat at the table expectantly. He talked while I began to work. In a flash of inspiration and resentment, I offered to give him a cooking lesson. “Instead of just sitting there, chatting my ear off, why don’t you roll up your sleeves and help.” He looked a little confused, like a house dog that’s been shooed outside for the afternoon. “C’mon!” I coaxed. “You might learn something.”

I proceeded to lay out all the ingredients. I should preface this by explaining that I’m no gourmand. My cooking style, developed over the years as a stay-home mom, could be described as utilitarian. There’s not a lot of artistry. Occasionally, I enjoy a little extra flourish in a recipe, but for the most part, I maintain a “git ‘er done” philosophy in the kitchen. Tonight, we were attempting a sautéed chicken and vegetable dish. It was a two-part process. After the stovetop, the food would go into a baking dish in the oven. Straightforward. Easy-peasy.

“You see Tim when you’ve been cooking as long as I have, you start to get a knack for what you’re doing. You might even get to the point where you don’t need a recipe,” I boasted and smiled as I sprinkled olive oil into the pan. “We’re going to start by sautéing the chicken,” I said in my best school teacher tone, slowly dragging out each syllable just as I do when explaining something complicated to my kids.

Tim nodded vigorously, but his expression communicated apprehension. As the chicken began to pop and sizzle in the skillet, I suggested we set the table. He looked a bit relieved to be moving into more familiar territory. As we made our way the short distance to the table, the sizzle and pop of the chicken gave way to a very different cacophony: CRACKS, BANGS AND SHATTERING GLASS. It was like a scene from Saving Private Ryan. Glass shot everywhere as we hit the deck. As abruptly as it had started, it was done. Eerie silence as I looked for the source of the explosion. I spied the remnants of a glass baking dish sitting on the electric burner. I had left it on high and placed the dish on top. The six pristine chicken breasts were wearing a blanket of tiny, glass shards. The chicken had taken the brunt of the shrapnel. We, however, had gotten away unscathed, other than a mild case of PTSD. “You okay?” I asked. “Yep.” As I surveyed the carnage, it occurred to me that we had escaped by mere moments from having a whole casserole dish explode in our faces.

Just then my husband got home. “It smells good. What’s for dinner?” I looked at Tim. “Chick-fil-A.”

I haven’t administered any cooking classes since then. But every time I drive by the local Chick-fil-A, I’m reminded of the “home cooked” entree they offered that night—Humble Pie, served up with a side of signature waffle fries. Tim’s still eating Costco chicken. He occasionally branches out to spaghetti and jar of sauce. He probably won’t be cooking much any time soon. My cooking lesson has most certainly cured him of that. More importantly, he’s never once rubbed it in my face that my cooking lesson was a disaster. He just laughs when I bring it up, reminiscing. He’s a good brother whose quiet confidence and humility have taught me a lot.